M. Liu, R.A. Calvo, V.  Rus (2014) “Automatic Generation and Ranking of Questions for Critical Review”. Educational Technology & Society.  Volume 17, Issue 2, 2014.
Critical review skill is one important aspect of academic writing. Generic trigger questions have been widely used to support this activity. When students have a concrete topic in mind, trigger questions are less effective if they are too general. This article presents a learning-to-rank based system which automatically generates specific trigger questions from citations for critical review support. The performance of the proposed question ranking models was evaluated and the quality of generated questions is reported. Experimental results showed an accuracy of 75.8% on the top 25% ranked questions. These top ranked questions are as useful for self-reflection as questions generated by human tutors and supervisors. A qualitative analysis was also conducted using an information seeking question taxonomy in order to further analyze the questions generated by humans. The analysis revealed that explanation and association questions are the most frequent question types and that the explanation questions are considered the most valuables by student writers.

Automatic generation of natural questions is a challenging task. This article addressed this challenge and presented a novel AQG system for supporting academic writing by applying overgeneration-and-ranking approaches. The results indicate that this approach is effective since the ranking model improved the acceptability of the top 25% questions by 10%. In particular, RankSVM slightly outperformed Logistic Regression and the experiments revealed that the semantic features are important. However, if the document is poorly written and cita 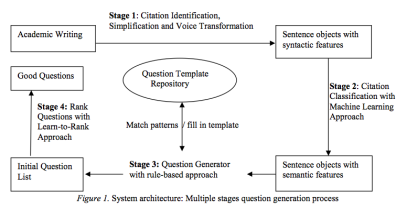 However, the question ranking model may not be applied to other question generation approaches since some of the defined features are only related to citations. To generalize this question ranking model, more generic question generation approaches and fine-grained generic features are needed. Despite these shortcomings, we believe that this AQG approach is effective and the evaluation meaningful because real academic writings were used. 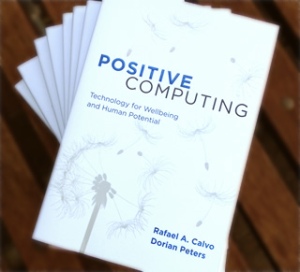